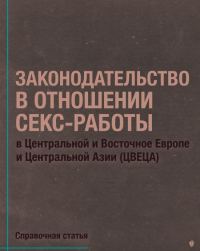 Every year, sex workers celebrate 2nd June as International Sex Workers’ Rights’ Day. The day commemorate the occupation of the Church of St. Nizier in Lyon, France on June 2nd, 1975.

Legal frameworks designed to control and regulate sex work have undergone major transformations in the last three decades in CentralEastern Europe and Central Asia (CEECA). These changes are largely due to turbulent political events defining the modern history of the region, such as the dissolution of the Soviet Union and the Socialist Federal Republic of Yugoslavia. Additionally, in 2004, 2007, and 2013 eleven Central and Eastern European countries joined the European Union (EU), with the obligation to comply with EU legislation and policy recommendations. These political shifts led to increased East to West migration and mobility of sex workers and new commitments and policy attention to gender equality in the region. The issues of sex work, migration (for sex work), and trafficking hence have been pushed to the forefront of international, European, and national public discourses and policy-making.

Countries in the CEECA region address sex work in various ways, to a great extent due to different socio-political environments, varying histories of legal approaches to sex work, and the lack of binding international law that guides states in their lawmaking. Contemporary sex work policies in the region thus present numerous similarities but also striking differences.

This briefing paper aims to highlight the diversity in dealing with sex work by countries in the region. The primary source of data that this paper is built on is information provided on the local contexts by member organisations of the Sex Workers’ Rights Advocacy Network (SWAN) from Russia, Ukraine, Kazakhstan, Kyrgyzstan, Tajikistan, Georgia, North Macedonia, Hungary, and Slovakia. Additional information on sex work legal frameworks is provided on Albania, Croatia, Serbia, Slovenia, the Czech Republic, Greece, Turkey, and Romania based on recently published studies and reports in the topic.