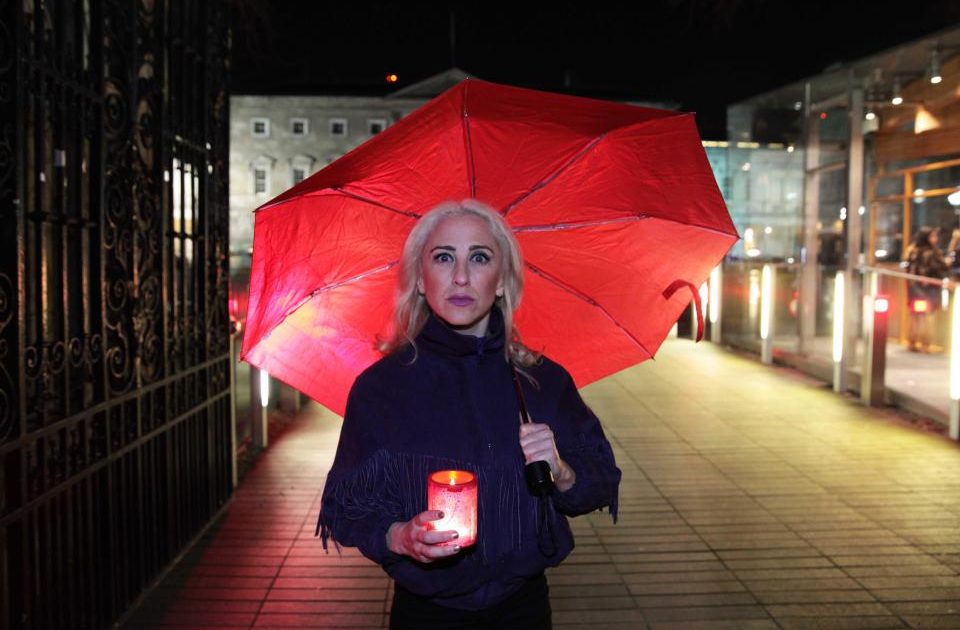 The reality TV star, who made her name in the RTE show Connected, claims sex workers are more vulnerable than ever since the introduction of new laws last year.

And she plans to hammer home the message in dramatic fashion, informing audiences about the challenges faced by people working in prostitution.

Speaking about her new production Hookers Do It Standing Up, she said: “As you can imagine there is a whole lot of fodder for comedy working in the sex industry.

“My show centres on an escort who leaves Greenpeace for the sex industry, in search of less degrading work!

“Obviously my clients’ privacy is 100 per cent safe with me, but the show gives a real insight into the world of the sex industry.

“It has serious points, but lots of punchlines, humour, and musings on the experiences and struggles of sex workers, and how bad laws and attitudes affect us.”

Ohio native Kate first came to prominence when she appeared on the RTE Two reality series Connected in 2014.

Her appearance hit the headlines as a woman working in the sex industry in Ireland speaking openly about her experiences.

Since then, the 39-year-old has become a vocal campaigner for sex workers’ rights, calling for the decriminalisation of prostitution.

This position put her at odds with organisations such as Turn Off The Red Light, an umbrella group of charities against the selling of sex.

The new law, designed to protect those involved in prostitution, criminalises the purchase of sex.

Following the model established in Canada, Norway and Sweden, buyers now face a fine of between €500 and €1,000, or up to five years in prison if the sex worker has been trafficked.

However, Kate insists it has only made sex workers more vulnerable, by forcing them to operate alone.

Under her stage name Lady Grew, the singer, actor and dancer is now taking her campaign to the stage in Dublin Fringe Festival.

She reckons it’s a novel way to help people understand what life is really like for sex workers in Ireland.

The straight-talking American has certainly helped to lift the lid on the industry since stepping into the spotlight four years ago.

And she’s heartened by the reactions from friends and strangers alike, saying: “Being in Connected and being the director of the Sex Workers Alliance, it has opened ­people’s eyes in general.

“But also, people are generally just so appreciative of me bringing our experience to light a little bit, especially because it’s so often something that we’re meant to feel ashamed of.

“I have sex workers, clients, and regular civilians alike who often say to me how glad they are that I’m out there and busting the stereotype.

“It’s challenging, people do have very real reasons to not be out and it can wreak havoc in people’s lives.”

She added: “Humour is a way to deal with it, and there are quite hilarious things that happen.”

Kate also finds a heavy irony in the fact that, from her perspective, sex workers have been excluded from the #MeToo and feminist movements. It’s a head-scratcher, because, as she says: “We have so much to add those movements.”

She revealed: “Because we experience the sharpest edge of misogyny, we’ve so much to say, and I feel people have so much to learn about our experiences.”

In the 17 months since the new legislation was introduced here, she has seen a grim change in the industry, an effect which has been directly the opposite of what the law intended.

She said: “Already, the new law has been horrible for sex workers and they’re so frustrated and p***ed off. It’s just part of what I do in the show is point out, with irony, that what was purported to make things better has clearly done the opposite.

“If you have this lopsided criminalisation where you’re purporting to arrest half of the people involved in the crime, there are clear ways in which that doesn’t work, and it makes policing more difficult.

“I talk about those things in the show, but when you’re coming at things in a humorous way, people have an “a-ha” moment and really understand.

If people are paying attention, they’ll understand what I’m saying is true and has happened, and it makes sense.

“People who are staunch supporters of that campaign are willing throw us under the bus for a future utopia that has happened nowhere in the world.”

Citing a specific example of the problems now facing sex workers, she explained: “A huge problem right now is that it’s illegal to work with one other person.

“They call that a brothel and they’ve raised fines for people working in pairs and groups.

“A woman is only de-criminalised if she’s working alone. She’s forced to work alone.

“That has really messed up our screening systems. Previously when clients asked if we’re alone, it used to be red flag, a warning that we couldn’t trust them.

“Now if they ask, maybe they’re just trying to make sure they’re not going to a brothel, but maybe not.

“I understand why people don’t connect these dots and realise how it has made things more dangerous for us.”

Her frustration is palpable, but while Kate has a public platform to air her grievances, she feels deeply for others who have no one to represent them.

She revealed: “There’s a real sense of anger, and a feeling we’re in a bind, as there are so many of us who can’t speak out.

“So we have to watch people say things about us and speak for us in ways that are just entirely misrepresentative and condescending.”

While the prospect of prostitution being decriminalised here is still a long way off, Kate’s hopeful that her stage show can at least make the general public aware that the new laws haven’t brought about the positive change that was expected.

Hookers Do It Standing Up has already enjoyed impressive reviews since its premiere at San Diego Fringe in June.