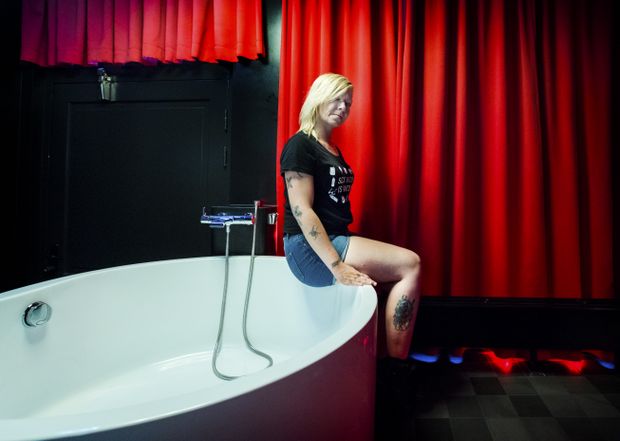 De Wallen, the infamous red light district of Amsterdam, is known for its legal brothels, where women market their wares by posing in windows beneath the glow of a red light, and pull the curtains closed when they are engaged.

But what do the women behind the red curtains think?

“This is my work and standing in the window in a corset and knickers is marketing,” Foxxy Angel says matter-of-factly.

“The key to window work is making eye contact,” she says. “The men always walk by a few times before they commit. They’re shy, unsure, embarrassed, but once you make eye contact…”

In Canada, where customers of sex workers can face criminal charges, the sale of sex is much more furtive, with men driving slowly through unofficial red light areas, or turning to classified ads.

The window brothels of Amsterdam – and sex work more generally – are seen by many as sexist, humiliating, exploitative.

“Of course sex work is exploitation,” she says. “But people – women – are exploited in restaurants, as maids in hotels, as secretaries, as farm workers. I have more control over my work than they do, and I make more money.”

Ms. Angel doesn’t have a pimp. She is affiliated with My Red Light, a group of sex workers who own and operate 14 windows. She is also a dues-paying member of PROUD, the Dutch Union of Sex Workers.

Sex workers have a high risk of AIDS. The brothel tour was organized in conjunction with last month’s International AIDS Conference in Amsterdam, where research was presented showing the risk of infection drops markedly when sex work is not criminalized. The sex workers agreed to be interviewed by the media on the condition that their professional names be used.

Sex work has been legal in limited forms in The Netherlands since 1830. Brothels were legalized in 2000. The red light district is a major tourist – and sex tourist – draw.

“While the Netherlands likes to present itself to the world as very liberal, it’s not like that in practice,” says Velvet, the advocacy co-ordinator for PROUD.

“There are so many rules and regulations that it’s still hard to do sex work in this country.”

What the union wants is full legalization, or at the very least, decriminalization, of sex work, plain and simple.

Influential organizations such as Amnesty International and UNAIDS endorse decriminalization, saying it is the best way to ensure the labour rights and human rights of sex workers are respected.

New Zealand made sex work and street solicitation legal in 2003, the only country that has done so. Other countries have a range of laws, ranging from outright prohibition to licensing of sex workers.

Canada’s anti-prostitution laws are among the most restrictive in the Western world. Its approach is known as “end demand” or the “Nordic model,” which focuses on the prosecution of those who purchase sex rather that those who sell it.

Sex workers argue that, regardless of who is targeted, customers or providers or pimps, legal restrictions drive the sale of sex underground.

When that happens, it becomes less safe for sex workers, putting them at greater risk of violence and infectious diseases.

The GNSWP says sex workers should have the same rights as other workers, including to associate and organize; to be protected by the law; to be free from violence; to be free from discrimination; to privacy, and freedom from arbitrary interference; to health; to move and migrate; and to work and free choice of employment.

Human trafficking is a crime. Those women are victims of horrible exploitation and abuse. That has nothing to do with sex work.

Ms. Thomas says a new puritanism is behind a growing crackdown on sex work around the world. Trafficking of women and the higher risk that sex workers will contract HIV are being used as excuses for repressive new laws, but that is the wrong approach, she says.

“I come from a coal-mining family in Wales,” Ms. Thomas says. “Lots of miners died. They didn’t stop coal mining; they made coal mining safer with better labour legislation.”

“Window work” is among the safest because it is legal and the red light district is heavily patrolled by police, as well as volunteers from the union, who shoo away gawkers and stop people from taking photos of the women in the windows.

Elsa does window work two days a week, from 10 a.m. to 7 p.m. on Fridays and Saturdays.

The setup behind the curtain is utilitarian: a double bed, several sets of clean sheets, a bathroom, a mirror, gaudy wallpaper and low lighting. There is also a safe and a panic button.

She sees about a dozen clients a day, although it can range from three to 32. (A study conducted in the brothels of Amsterdam found that clients take, on average, six minutes to complete the transaction.)

“I give extra time and I’m extra nice. That’s why my clients keep coming back,” she says, before adding that may seem ironic, given that she specializes in domination and sado-masochism.

Velvet, who does not do window work (she is exclusively a lesbian escort), says that is increasingly the case.

In recent years, the number of windows has been reduced to about 300 from more than 600, and there are plans to cut another 100.

The driver is a combination of an enforcement crackdown focused on underage and unlicensed foreign workers, gentrification and a backlash against the hordes of tourists in the Dutch capital.

For sex workers, the problem is that the licensing and related regulation of brothels has made it more difficult to work independently, especially at home.

Along with concentrating brothels in a central red-light district, the city largely eliminated “tipplezones,” where street prostitution was the norm.

Increasingly, sex workers sell their services online, and take clients home. But, if they do so in Amsterdam, they must request that the property be zoned as a brothel or they can be evicted.

While the common justification for increasingly strict rules is to crack down on sex trafficking, Velvet says that does not hold water.

She says women who are trafficked are kept isolated and on the move, far away from regulated areas such as the red light district.

“Human trafficking is a crime. Those women are victims of horrible exploitation and abuse. That has nothing to do with sex work,” she says.

Velvet says sex workers would like equal treatment under the law.